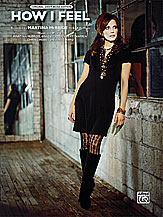 Martina McBride has been performing her vocally stunning country songs since 1992, when she performed the opening set for the legendary Garth Brooks after being discovered only two weeks prior. Her nine-album total makes her something of a country music legend, as do her nearly 50 top singles to hit the charts. A role model to her three young daughters at home, an idol to young stars like American Idol?s Carrie Underwood, and winner of multiple awards from the Country Music Association and the Academy of Country Music, Martina?s strong soprano voice continues to move country music fans across the nation. Alfred presents the sheet music to her latest single, How I Feel, from her ninth album, Waking Up Laughing. The song includes lyrics, melody line, and chord changes with professionally arranged piano accompaniment.